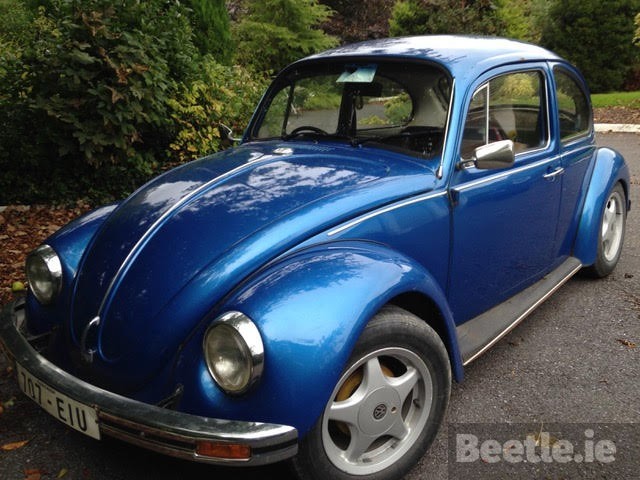 This is very nice looking 1977 Limerick registered Beetle. It has an interesting history going back to when it was bought new by the groundskeeper in Glenstal Abbey. It was then bought by the Father Superior of Glenstal Abbey before making its way to Innishannon in the beautiful county of Cork.

Assembled in Dublin and finished in Manila Green (L63Y) with a 1200cc engine, this Beetle Deluxe was sent to Limerick to be sold to its first owner which, as we mentioned above, was the groundskeeper in Glenstal Abbey.

Over the years the Beetle went to a number of different keepers beofre finding a very proud owner in Cork. Th eInnishannon native was thrilled with her Beetle and loved the metallic blue paint and aftermarket rims. The 1600cc engine gave this once sluggish Beetle some much needed punch. 707 EIU was the pride and joy of this lady who also used it for her wedding, as well as having other VWs on the day to make it even more special. With a growing family and other commitments the owner has made the very tough decision to sell her baby to someone who has the time and ability to mind it in the same way she has done.

The car is dry stored in her mother’s 2 car garage so hasn’t been left out in the elements. Saying all that, there is some rust but that is to be expected in something that is 41 years old. We have not seen this car up close and can only go on these photos. If we get anymore high res images we will upload them here for you to see.

The original 1200cc engine is no longer with the Beetle but it has been replaced by a larger engine we believe. We are waiting to get the new engine number so we can see what size it is.

If you think this genuine Irish built Beetle is for you then get in touch with us and we will pass on your details to the soon to be heartbroken owner!

UPDATE 10-08-2020 Beetle.ie: We’re delighted to say that we were able to put the seller and the now new owner together and can now report a very positive outcome. Like so many Volkswagen enthusiasts browsing Beetle.ie, the new owner spotted this Beetle in our For Sale section and contacted us to find out a bit more. Armed with the information, he bought 707 EIU on the first inspection. We’re delighted for both the seller and the very happy new owner. We wish him all the best with this lovely Bug.

UPDATE 15-02-2022 by Humphrey Lynch, a previous owner: “Hi, I bought this Beetle from Martin Murray after it suffered an engine fire back in the late 90s early 00s. There wasn’t major damage done and the Beetle was in original solid condition. The 1200 engine was totally seized so I removed the engine and got the body sandblasted and then replaced the deck lid due to the heat of the fire. It was a very solid car and there was an excellent paint job done on it . I sold it to the lady in Inishannon who was in college at the time.”