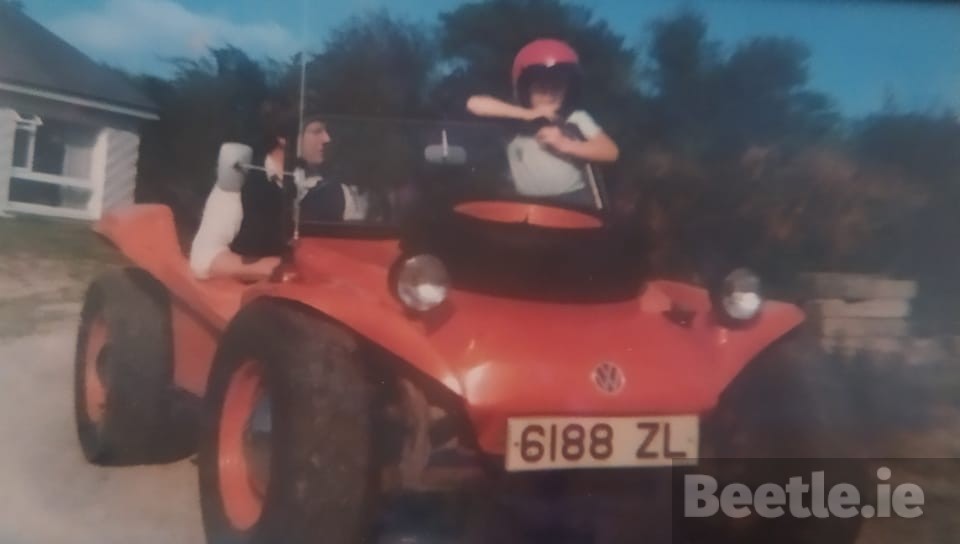 “Hi Cathal. This is a photo (of a photo) that was taken back in the early 1980s. I’m wearing the helmet. Dad drove this Beach Buggy from Tallaght to Clashmore at night with me holding the plastic roof on at the back. An epic adventure but not a journey I’d like to repeat!! The Beach Buggy itself was based on a 1973 Beetle but oddly it was 6v. It was bought from an Austin Broderick of Bird Avenue around 1978 by Kevin Harding. It was collected from Palmerston Road, Rathmines and brought to David Sheane (Formula Vee expert ) who shortened chassis by 12 inches and made the body from fibreglass. My father Richard Dee and Kevin under sealed the chassis and assembled it at 36 Frankfort Park, Dundrum. No mechanical work done bar a service. They used it until 1983 when it was sold to Des Coffey who later took over the Ormonde Hotel where it was put in the hotel disco, bolted to the floor and became their DJ box we believe for a time. No idea what happened it after the hotel closed. Should not have rotted due to sealing and fibreglass. Hope this is useful! Regards Mick.”