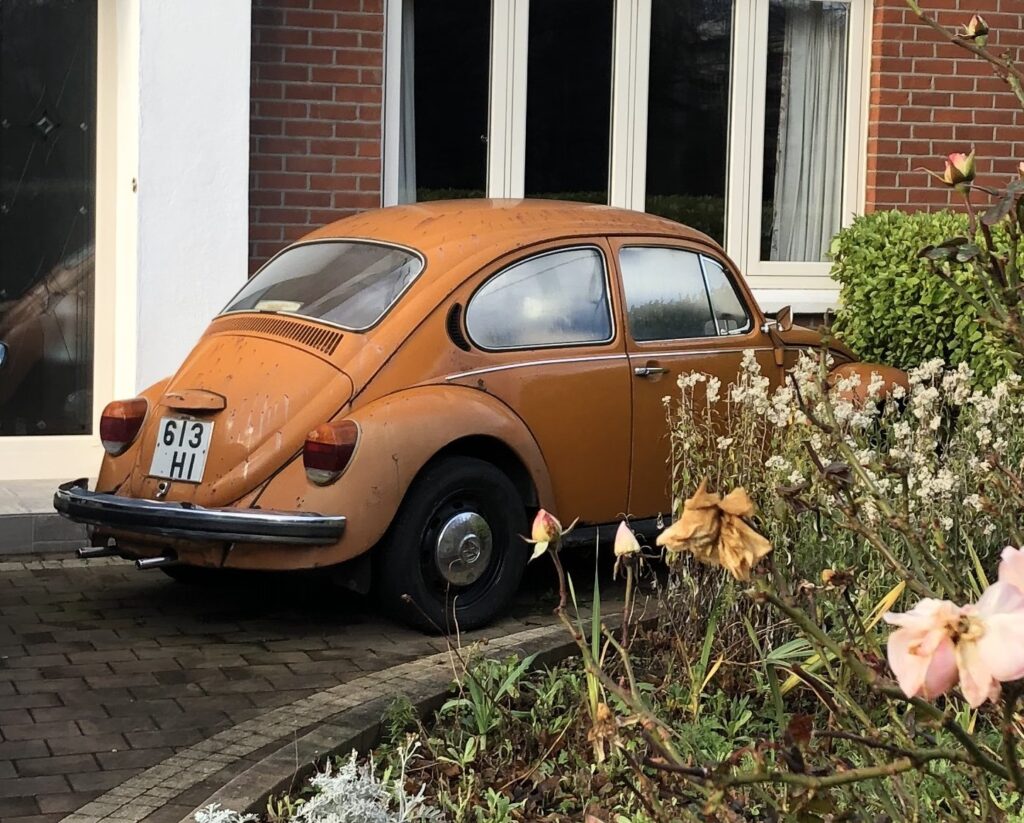 Noah Ryan is one of our top contributors and seems to have a knack for sniffing out Volkswagens all over the country. He recently spotted this forlorn looking Beetle in Dublin recently. The Tipperary South registered Beetle is missing a digit from its registration but going by the model features and the colour, Panama Brown (L12A), this would be a 1977 model. The 1200 Beetle Deluxe would have been part of the last off the line for MDL and was probably sold from Andrew Dillon & Sons in Clonmel but we need to find out some more information before we can confirm that. What we can see is the rear window dealer sticker and that does look like an O’Callaghan’s of Kanturk sticker so whether it was sold originally from Kanturk or whether this Beetle went through there at some later time in its near 45 years life we don’t know, but we’ll do our best to find out. The paint looks to be the original and although sitting outside for a number of years and rust appearing in the lower rear quarters, this Beetle looks like it’s a good candidate for a full restoration.

Thanks to Noah for his Beetle hunting!

UPDATE 18/01/2023: I love our little VW world! I got a call last night from our good friend Pat O’Flynn who recognised the Beetle the second he saw it. Firstly Pat was able to confirm that the missing digit from the registration is in fact the letter B so the registration is 613 BHI.

Pat remembers this Beetle being bought from O’Callaghan’s of Kanturk in the early 1980s when it was less than five years old by Mallow man Finbarr Roche. Pat tells us that the Beetle was immaculate, being low mileage and having been pampered by the previous owner. It stood out from all other cars when it was parked in Mallow and Pat always admired it. The Beetle left Mallow, possibly in the late 1980s or early 1990s, and may have also left Cork at that time as Pat had not seen it since. The Beetle is obviously being minded as it has been in the same ownership in Dublin since at least 2018 so perhaps they will get it back on the road some day.

Thanks for your help and knowledge Pat. We really appreciate it.

Cathal & Trev, and of course Noah who found the Beetle in the first place!