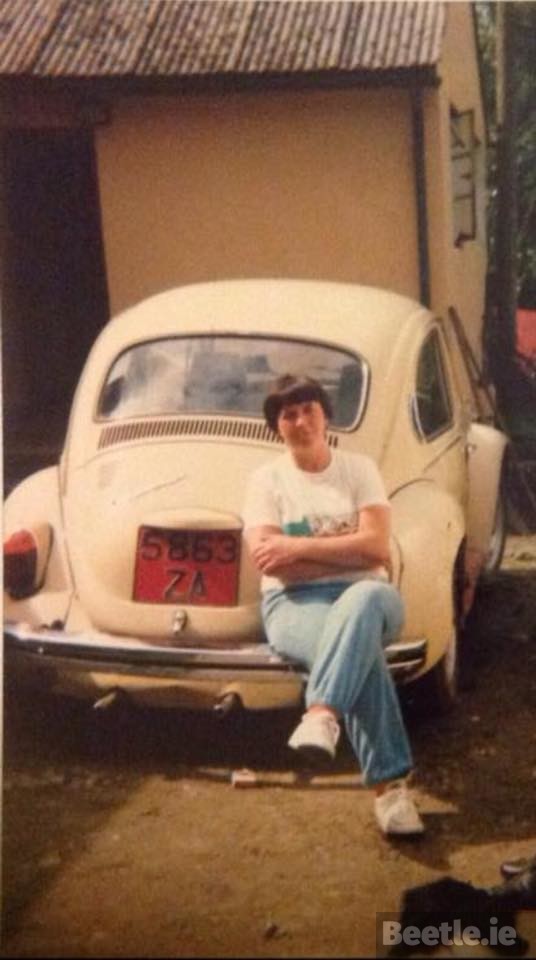 Thanks to Anthony Byrne for submitting this photo and the story to go with this poor ill fated Beetle. The lady in the photo is Anthony’s aunt.

“I took this photo of my aunt sitting on my brother’s Beetle when I was about 12 years old. Later on as a teenager I rolled it and wrote it off. In my defense I got a blow out thanks to a bulge in the tyre which I ignored……my brother wasn’t very happy at all.

My brother Derry who passed away in 2012 owned it. in 1987 when I was 15, Derry went to Spain for a few years, leaving me driving the Beetle around the forestry roads on Derrybawn mountain with no supervision and no big brother to look over my shoulder for. I was obviously way too young for a licence. One day I brought a friend of mine up to the very top of Derrybawn. He was waiting patiently for a go in the Beetle when I decided to see how fast I could go on a straight bit of road knowing that there was a large bulge in the front tyre. We got a blow out and the car turned over and came to rest driver’s side down with my friend Darren lying on top of me. I said are you alright because he wasn’t moving. He replied yes. I said well get off of me then!
We heard a trickle sound and thought it was petrol and we scrambled out through where the window used to be. It turned out to be just water in a nearby drain. Sadly the car was a write off. Later my other older brother sold it to a group of local young lads who pulled the doors off and made it into a kind of buggy. They would bring up cans of petrol and race it around the top of Derrybawn. With plenty of sheer drops above the lake it was quite dangerous looking back now. It came to an end when one of the young lads father went up and found the Beetle and burned it out. We were all fairly upset at the time but now in hindsight I suppose he did the right thing and probably saved lives.”