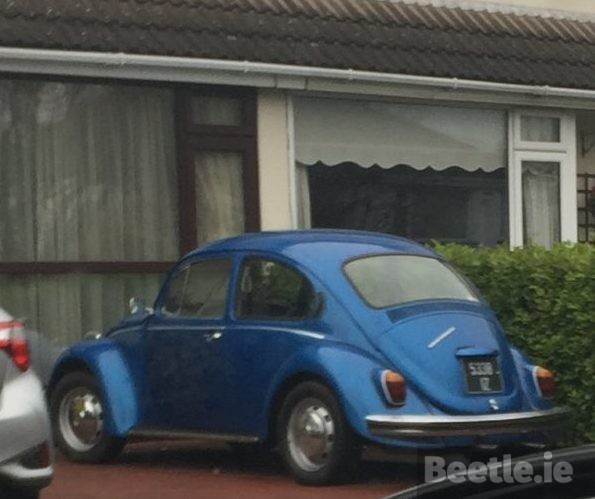 This is the second of two additions Noah Ryan made to the Beetle.ie Census recently. The first being a Bay Window Bus with the registration number 510 XZA.

Noah: “This Beetle used to be up the road from me and by the looks of things, it got a full restoration.”

This 1200 Beetle Deluxe first saw the Irish roads when it was sold new in Mayo back on October 1st 1973. It made its way to Dublin at some point and as Noah noted, it has had a full restoration and looks very smart. We’re not sure what the new colour is but it’s a great choice. Beetles can really take any colour but especially metallic paints.

UPDATE 26-09-2021: Thanks to Emilio Macari from Emilio’s Beetles for this update. “This Beetle was bought new by its first owner, a school principal, in 1973. When he moved to Dublin he took the Beetle with him, having it restored and repainted green by Emilio’s Beetles back in 1993. This Beetle stayed as a reliable daily driver with its original owner until he sold it in 2006. It then changed hands a number of times, going out as far as Wicklow before returning to Dublin. The funny thing is that this Beetle spent most of its life in Rathfarnham in Dublin, and after a few new owners it now resides about fifteen minutes away from its original owners home in Dublin!”