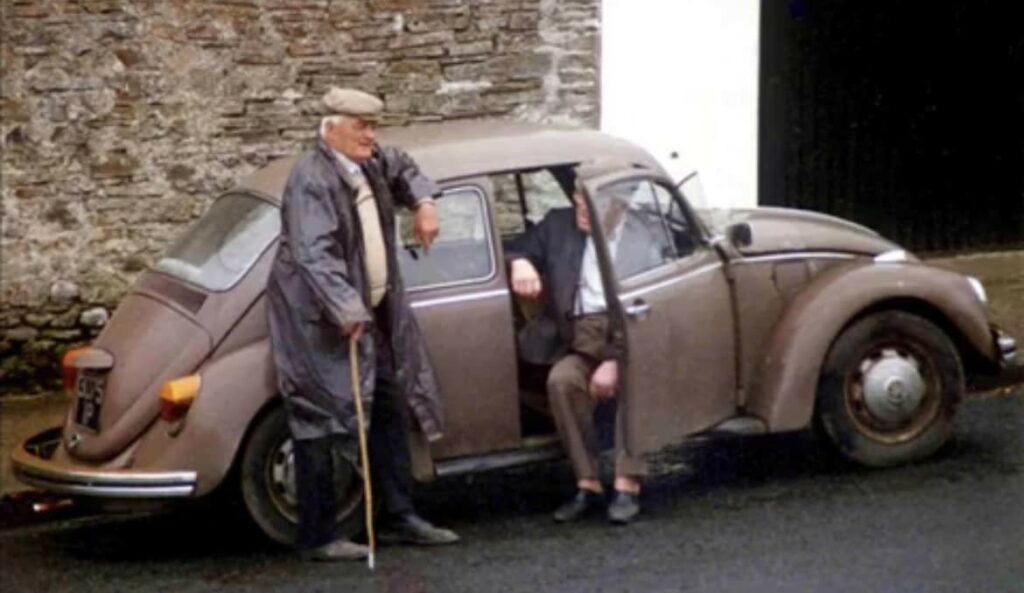 It’s not every day that we see a ‘then & now’ photo but thanks to Darren O’Rourke of the Original Irish Aircooled VW Facebook group and David Cole, a Laois based VW enthusiast, we have a match!

We’re not sure who the original photographer was but they captured Ireland brilliantly as it was back when the Beetle was a common sight in every Irish village, parked up on market day, the Beetle doubling up as the best spot to lean against and chat. The names that are noted on the photo are Andy Keating (standing) and Nicholas Hoyne (seated) so we can only assume that Nicholas was the owner.

By then this 1976 Havana Brown (LD8A) 1200 Beetle Deluxe had clearly lived a hard life, working for its keep on a farm and looking less like a Deluxe every day. The time had taken its toll on it as the next photo that was taken by David Cole shows it when it was parked up in an open fronted barn, slowly rotting away in our damp climate. Sadly, it is unlikely this Beetle will ever see the Irish roads again but stranger things have happened so fingers crossed that some day, the big restoration might happen!

Do you know of a ‘Then & Now’ Volkswagen? Have got some photos to add to the story? Why not get in touch with us at Beetle.ie by emailing beetleireland@gmail.com or by submitting a new entry on the homepage.