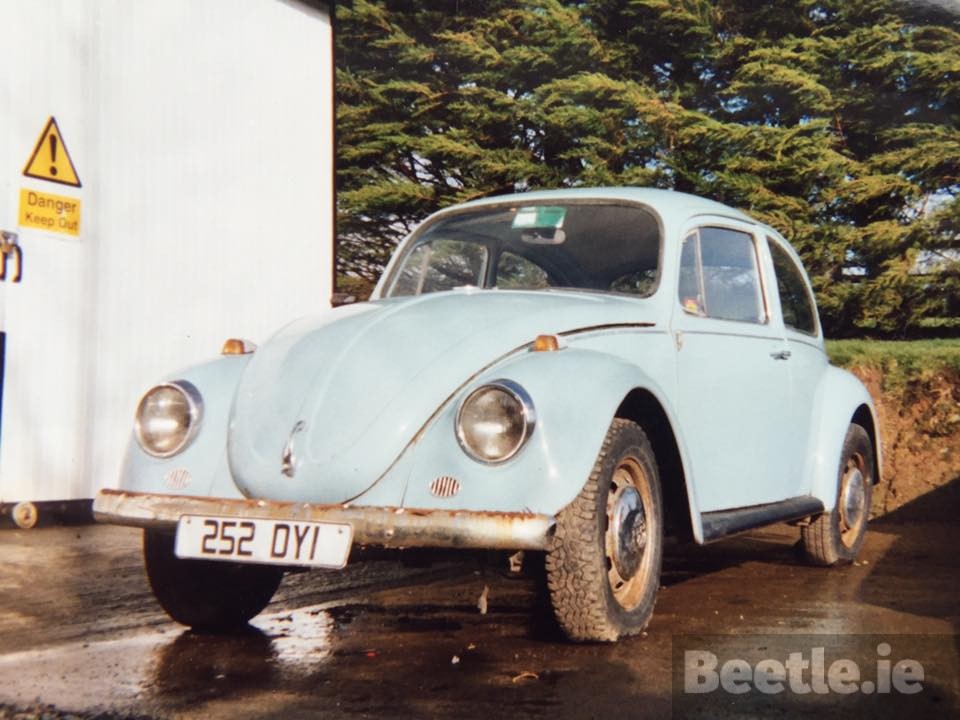 This is a great story, submitted by Tsar Sheane’s. It was Tsar’s first Beetle. If you think that family name is familiar then you would be correct because Tsar’s family had one of the first Volkswagen dealers in Ireland. Their amazing story will be featured in our book on Volkswagen in Ireland.

“I bought the car in Bagnalstown in 2000, my first Beetle. It drove home but was running crap thanks to the leads being the wrong way around.
It seemed good but was actually tarted up and full of filler. I found a road sign pop riveted in the rear floor/battery tray area and smoothed over in filler and underseal.
I started into the restoration and found the channels shot too and when I lifted the body off more rot showed itself and then the inevitable happened; other projects came along and I got distracted by other things and years later I stupidly cut up the body as at the time I couldn’t weld very well and more importantly, the body was in the way and my mother didn’t like it making the place look bad. I figured I’d buy a 356 tub for the pan. Anyway, I still have the ‘pan and all the running gear, log book etc. I even have the doors. Gobshite really! It was a 1200 standard model and I think it was a 1971 or 2, originally a Northern Ireland Beetle and imported here in 1976 I believe.”

Thanks for submitting your first Beetle Tsar. It’s a cool, and oh so familiar story for anyone who bought a less than perfect first Beetle! Tsar’s Beetle is a Marina Blue (L54D) Sparkäfer model, meaning it was the base model at the time. Sold new in Northern Ireland in 1971, Tsar’s Beetle was imported into Southern Ireland in 1976 and registered in Dublin in April of the same year. This economy model had short headliner, metal dash, blade bumpers, standard steering wheel, no sound deadening, no chrome window trim, basic door cards and so on. Basically, it was a no-frills model that was purposeful so not always looked after like the Deluxe Beetle was. As a result, these Beetles are becoming very rare and sought after by collectors.