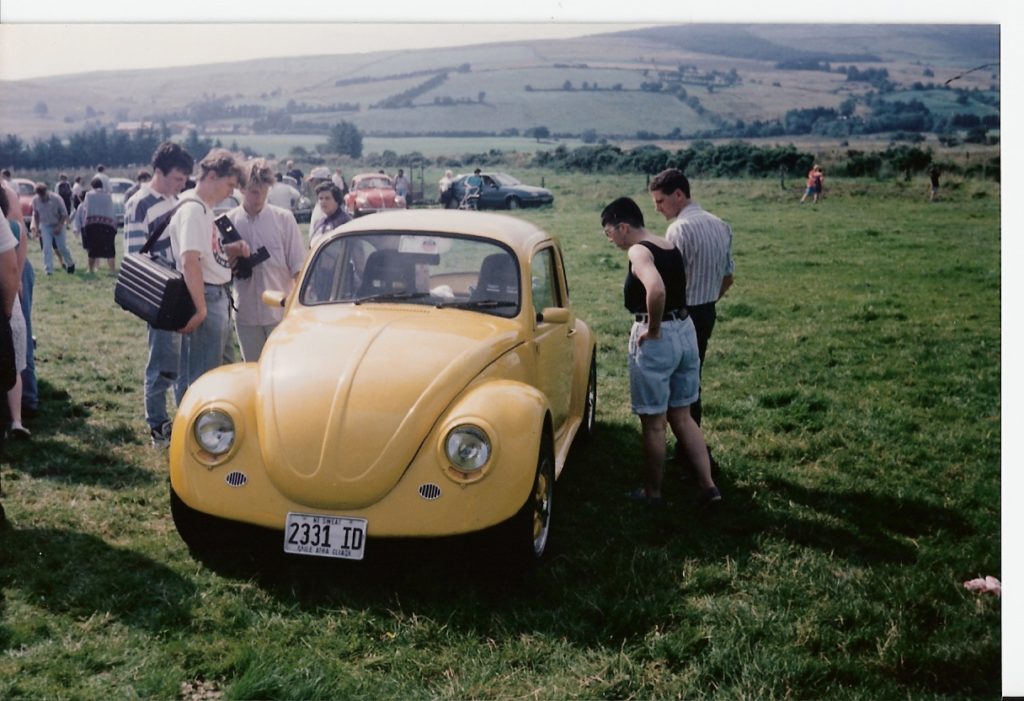 Although I came across this Beetle twice, I know very little about it, in fact, I know nothing about it, other than it was modified when I first saw it and even more so the second time.

The first time I saw this 1977 Cavan registered Beetle was at a VWOC (Volkswagen Owners Club) of Ireland monthly meeting at the Leopardstown Inn, Dublin. It had been slightly modified in that it had been repainted in a non VW colour and the bumpers had been removed. It had been fitted with wider wheels and Cal Look window rubbers were also fitted. This was probably in the late 1980s, maybe 1989 or possibly 1990.

The next time I saw 2331 ID was at the now famous Kilcommon VW Show in Tipperary. It had been fitted with 6 volt wings, had Rossi headlights fitted, smaller rear lights and the wings had been blended into the bodywork. EMPI 8 Spoke rims, one piece windows, Recaro style seats and much more. The owner had certainly stepped it up from when I first saw this 1200 Beetle in Leopardstown.

Sadly the Beetle has not been taxed since 1993 so is not on any digitised taxed system so it looks like this Beetle didn’t get much further than an outing to Kilcommon.

UPDATE 17-05-2020: An update from Emilio of Emilio’s Beetles: “This Beetle was repainted metallic Blue by us at Emilio’s Beetles back in 1988. After a few years the owner decided he wanted a change of look of the car and carried out the colour change and the blending in of the wings etc. I bought the car in 2006 from the same owner and it sat as a parts donor car at Emilio’s Beetles until 2009 when another Beetle came in for a full restoration. That Beetle’s body was beyond economical repair so I replaced it with the body from 2331ID. It was then fully restored back to original factory specification, mated to the fully restored chassis and is still on the road today on a white Beetle with the registration number VID 782, ironically, another Cavan registered Beetle.”

Thanks for the update Emilio. It just goes to show that old Beetles never die and even in a bad state, they can offer up many valuable used parts, including a full bodyshell. Back in the days when you could order your new Beetle from the Volkswagen dealer, you could also go to the Parts Department and order an entire new bodyshell as this was classed as another part.