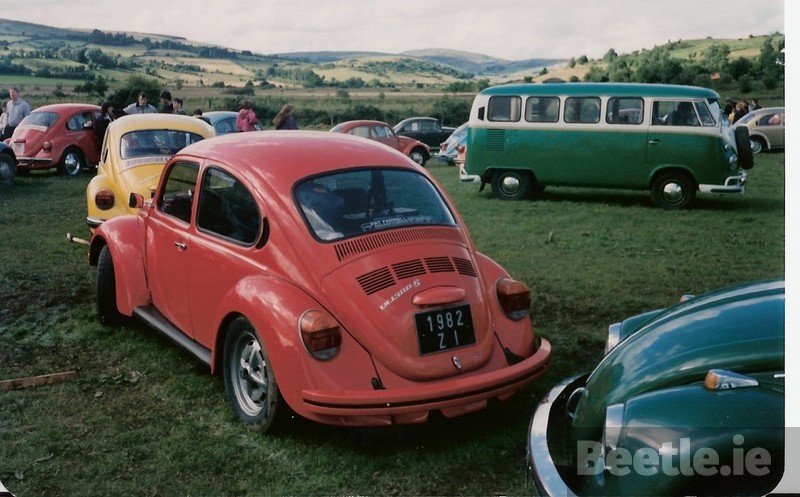 This 1300S was once a very much loved Beetle. It was owned by Southern Volks Folks members who would travel Ireland to show their VW. All bolts were replaced by Hex bolts at the time of restoration. It was fitted with one piece tinted driver & passenger windows while all other glass was tinted also. Colour coded bumpers competed the subtle custom look.

It was for sale in Longford back in 2008 but it is not known where it went after that. It then ended up going to Eircooled member Paul Twibill who found it too rusty to restore, stripped it for parts and scrapped it only a few years ago.

the previous owners of 1982ZI got in touch with Beetle.ie to add some more of its back story. Thanks to Martin & Hilary Raeside for taking the time to send in your memories and additional photo!

Great to see our beetle included on your website. The picture above was taken in Kilcommon, there was an aerial photo taken, we created a picture of a Beetle with Beetles, we were part of the back wheel.
Like a long-lost child, we have spent many years wondering if we would ever see 1982ZI again. At every car show we would be on the lookout for her. It is sad to see her end up this way but we have many many happy memories. We bought her in 1992 but this car was not just a show car, it was our daily driver also, we went everywhere in her until we sold her in 2000 to buy a split bus which we still have.
The previous owner was David Geoghegan who originally built the car, and we sold it to the guy from Longford.
Owning our beetle was a wonderful chapter in our lives. We didn’t know when we bought it that we would create so many great memories and make so many lifelong friends.
Martin & Hilary