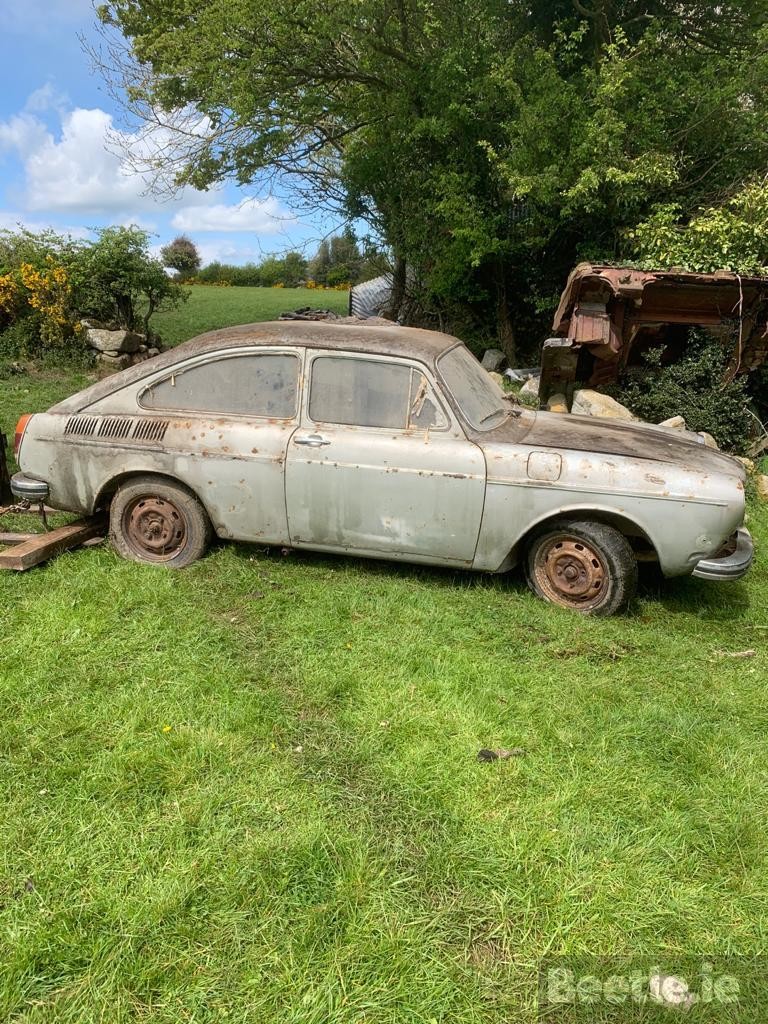 Here’s a classic Volkswagen we’ve been dying to add to the Beetle.ie Census ever since the Fastback was discovered in a purpose built barn. An Irish registered Fastback is a rare machine anyway but to find one in an unrestored condition is unheard of. What makes this Fastback and even better find is the fact that it is an actual barn-find, not something someone has had in their home garage and adds the ‘barn-find’ label when they want to sell it. No, this is the real deal. A 100% genuine barn-find!

Ok, you’re looking at this Type 3 and thinking it’s rough, really rough, but look a little closer and you’ll see that it is probably one of, if not the best unrestored, original metal Type 3s in Ireland. A big claim I know but it’s true. So many of these rare VW models rusted away beyond the point of economical repair so were scrapped or used in banger racing. This particular Type 3 has managed to survive in original paint. There are of course, lots of spots of surface rust but no deep rot as you would expect and the best part is that it hasn’t been messed with over the years, there are no dodgy filler & fibreglass repairs and no welding is needed. That’s just unheard of in terms of Type 3s.

After a serious session with a power hose, Peter, the new owner tells us that it has come up even better than he had hoped. This is made all the better by the fact that Peter didn’t really think he’d buy it but decided to go and ‘have a look anyway’! I got a very excited phone call from Peter that evening as he drove home with a fully loaded trailer but even after seeing the photos I didn’t quite believe him when he said it was in such good condition but having seen the detailed photos post cleaning I have to take my hat off to him and say well done, you got a beauty!

So what’s the history to this unusual VW? Firstly it was not built in Dublin but was brought in by MDL as a fully built vehicle. The Fastback was finished in Metallic Silver (L96D) which was unusual for a VW of the time being metallic, although many of the more expensive models like Type 3s and Type 4s were offered with metallic paint. At the end of May 1972 this Fastback was driven out the gates of MDL, bound for Tipperary. Dillon’s of Clonmel was the main dealer that was to take delivery of the Fasty and we can only assume they had a customer lined up straight away as it was registered on June 1st 1972.

Incidentally this was the only Fastback that Dillon’s took delivery of in June 1972. All other Type 3s sent to Dillon’s in June were Variants.

At some point in its past, the Fastback was purchased by the previous owner’s family for him to use. He looked at it and said it’s too nice to use so he built this barn and drove it in. Not only did he not want to drive his Fastback but he also wanted to protect it so he closed up the opening to the barn after he had parked his Type 3 in there. The only access in or out was via a single door so even if he wanted to get it out he couldn’t! The Fastback was hidden from view so much that the owner’s nephew didn’t even know it was there, and he lived on the same farm as the owner. After the owner passed away his nephew found the Fastback and offered it up for sale once he figured out how he could get it out of the tomb that it was residing in. When Peter bought the Fastback, this was the first time in decades that it had seen the light of day.

If you’re in any doubt as to whether this was actually found in a barn then look at the photos of the barn. That’s where this Fastback was stored for many years so anyone claiming to have a barn-find better look at this listing to see what they’re up against if they want their VW to wear that barn-find badge!

Well done to Peter for saving this Fastback and best of luck with the restoration.