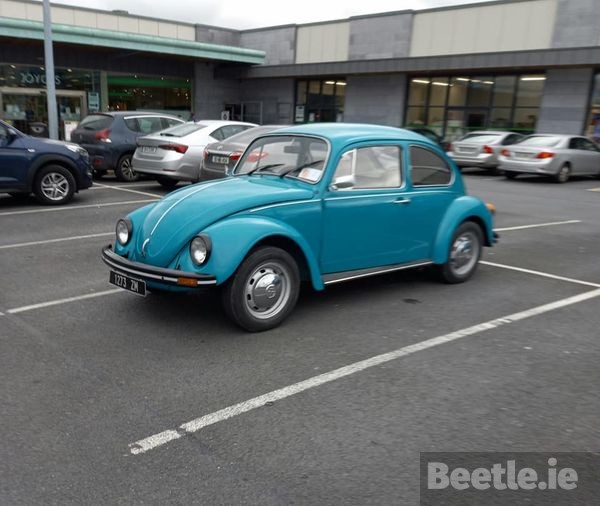 We have Pat Casserly to thank for this entry. Pat posted these photos on the Irish Vehicle Registrations Past & Present Facebook group on October 14th 2021 and very kindly allowed us to add this Beetle tot he Census.

Pat noted that he “Spotted this Beetle in Headford Co.Galway today. Immaculate condition, photos do not do this car justice. In comparison to other cars in the car park, even small cars this Volkswagen is pretty small. Most other cars fill up the spaces whereas there is loads of space around this car.”

Patrick Burke replied to Pat’s post saying “1978 reg on 77 car as it was common practice to have “FOR REG” written in yellow for a number of months back then.”

We don’t know much about this Beetle other than what we can see from Pat’s photos and his description. The colour looks very close to the original Ocean Blue (L57H) colour which was used on Beetles in 1977/78. The Beetle has obviously been restored and I can see that the rear vents have been deleted to prevent rust at a later stage. The black bumpers might have you thinking it is a 1200N Base Model Beetle but there seems to be a full headliner and a padded dashboard which would suggest it is a 1200 Beetle Deluxe. The most important thing is that it is being enjoyed by its current owner, and who could blame them!

Thanks Pat for allowing us to use your photos. We appreciate it.