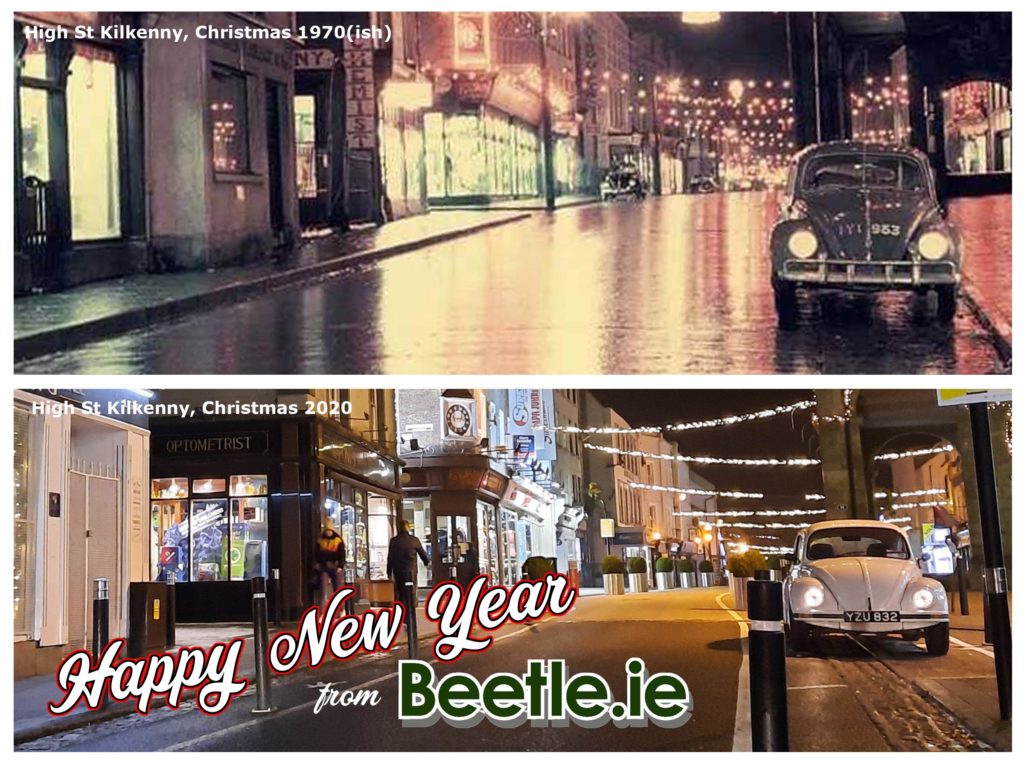 This is a joint listing. On one hand we’re adding this 1958 Beetle to the Beetle.ie Census while on the other hand it is a message from us here at Beetle.ie wishing everyone a very Happy New Year.

Before we get to the 1958 Beetle, we want to say thank you to everyone who has followed the Beetle.ie project in 2020, supported the Beetle.ie Census by submitting photos, updates and information and sent us stories for inclusion in the book. Beetle.ie is nothing without your support and valued input so we say a huge Thank You to one and all.

As you can imagine the global pandemic has impacted our research for the book by restricting our ability to meet with and interview people, to scan their photos, to photograph and log their VW memorabilia and more importantly, to gain a better insight into Volkswagen in Ireland from those people that were there.

We have a very full schedule for when we are finally allowed to get back to normality and travel around Ireland meeting people once again. We can assure you that the wait will be worth it because we are bringing you a book filled with never before seen stories, facts, photos and memorabilia.

So from Trevor & Cathal, we wish you all a very happy and fun filled 2021!

Mary Phelan is the lady we wish to thank for allowing Beetle.ie to use this photo in both our Christmas and New Year messages. The photo itself was taken by Mary’s late father Mick Phelan on High Street in Kilkenny some time in the late 1960s/early 1970s. The photo is unique in that it appeals to so many people, be they photography enthusiasts, classic Volkswagen enthusiasts, historians looking back at Ireland through the years or just those looking for a period Christmas scene. Mary’s father Mick had the ability to open that shutter at just the right time and it clearly shows in this fantastically atmospheric photo. Little did Mick know when he took this photo late one December night that 50 years later it would still be capturing people’s imaginations.

Ironically, the Beetle did not belong to Mary’s dad, it was merely parked in the right place at the right time. IYI 963 is a July 1958 Dublin registered Beetle. The 1200 Beetle Deluxe was assembled in Dublin, at the Naas Road facility, was finished in Anthracite Grey (L469) and was ordered with bumper overriders. IYI would have also had a stunning red interior installed which would have come alive when paired with the ivory dashboard knobs, gearlever, handbrake handle and steering wheel as well as the Anthracite Grey paint on the dashboard. Add in the chrome dash trim and you have a winner!

Sadly we don’t know anything about this Beetle’s history but what we can see is that it has an extra set of bumper overriders installed on the front bumper, a centre mounted aerial and the number plate has been removed from the bumper and relocated to the bonnet as a sticker. Was the owner a motorsports enthusiast who raced this Beetle at one point? It certainly looks as if this Beetle was owned by an enthusiast, be that motorsports or Volkswagen. Either way, I bet they too would get a huge kick out of seeing their Beetle still being admired half a century later!

Trev wanted to recreate Mick Phelan’s photo so just before Christmas 2020 he hopped into YZU 832, a 1970 Mexi bodied Beetle, and made his way to High Street in Kilkenny. The night was wet but sadly not as wet as the night Mick took the photo. What was similar was the fact that the street was empty however the street is now a one way street, the other way! This wasn’t going to stop Trev so he waited for all of the traffic to clear and did a quick u-turn, parked the Beetle in what he felt was the perfect position and began to take photos. I think you’ll agree he did exceptionally well.